Next to water, tea is the most popular non-alcoholic drink in the world. There are millions who swear by its revitalizing properties, aroma and the unbeatable satisfaction a cup of tea gives. Most of us who reach out for our favorite cup is not aware that there are over a thousand varieties of teas in the world. So, where to go to have the best tea of your life?

Dating back to the 10th century B.C., Chinese tea culture is the oldest in the world. Despite its long history, tea drinking customs and traditions are still prevalent in today’s modern society. Tea lovers will particularly enjoy the variety available in China, ranging from the locals’ favorite — green tea — to white, black and flowering tea.

When visiting a local’s home, travelers are often invited to join the hosts for a cup of tea and a chat, but the best places to enjoy these teas are the ubiquitous teahouses found across the country.

Tea, that most quintessential of English drinks, is a relative latecomer to British shores. Although the custom of drinking tea dates back to the third millennium BC in China, it was not until the mid 17th century that the beverage first appeared in England.

Afternoon tea is said to have originated with one person; Anna, 7th Duchess of Bedford. In the early 1800’s she launched the idea of having tea in the late afternoon to bridge the gap between luncheon and dinner, which in fashionable circles might not be served until 8 o’clock at night. This fashionable custom soon evolved into high tea among the working classes, where this late afternoon repast became the main meal of the day.

In India, chai tea (black tea with added milk and spices) is consumed by locals on a daily basis. It’s sold on street corners and served in restaurants and can even be found at train stations. But India is not only a place to sample authentic chai tea, it’s a fantastic destination for a tea-themed holiday.

Travel to northern India to discover Darjeeling, one of India’s most popular hill stations. Stay among tea plantations, admire stunning views of the tea gardens and enjoy plenty of trekking opportunities, all while sampling the aromatic and delicate Darjeeling tea. Alternatively, visit the Brahmaputra Valley, often referred to as the “tea capital of the world,” thanks to its vast Assam plantations.

Tea lovers will be fascinated by the art of tea preparation in Morocco. Referred to as Berber whiskey by locals, Moroccan mint tea is brewed using green gunpowder tea as a base and served with fresh mint and sugar. Tea is traditionally prepared and served by the man in the family and often considered a ritual to be passed down from generation to generation. It’s fascinating to watch!

Moroccan mint tea is not only served during meal time but also plays a huge role in social gatherings. Locals love spending their days people watching and discussing the latest news while sipping mint tea at cafes. Similar to Turkey, drinking tea is a much-loved tradition and a sign of hospitality. Many riads (traditional guesthouses) offer guests mint tea upon arrival as a way to welcome them.

Enjoying Morocco, don’t miss any important work. With a cloud-hosted virtual desktop from CloudDesktopOnline, you can work as you travel and access all your important files and contacts on your Office 365 on the same desktop by O365Experts.

For Hong Kong people, there is one ‘king of drinks’ and that is a steaming hot, irresistible milk tea. You will find locals sipping a cup at cha-chan teng (茶餐廳) with a sandwich, egg tart, French toast, or instant noodles. Originating from British colonial rule, the afternoon tea was replicated with ‘evaporated’ milk (花奶) (which has much of the water removed from fresh milk), along with added sugar for a thicker texture. The tea became known colloquially as “silk stocking milk tea” (絲襪奶茶) as the sieve inside the teapot looks so much like pantyhose while Hong Kong people believe that the way it is made helps retain its strength and smoothness. No one has a definitive method of making milk tea. From a base of English breakfast tea, blends can include Lapsang Souchong and even Pu-Erh or Green Jasmine. One thing is clear: the city’s most successful tea makers keep their recipes very close to their chests.

Now that you’ve figured which countries to book your next ticket to, the next question in mind is how to explore these cities while enjoying a cuppa? I think we can agree that it’s pretty preposterous to carry around tea making facilities such as kettle and mug while you are out and about exploring attractions. 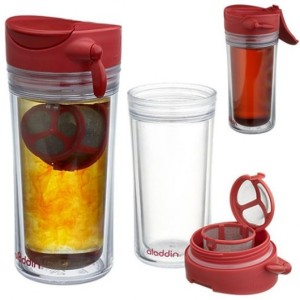 Travel tea infuser mugs aren’t an expensive option either with prices ranging from $10 to $30. When choosing your portable tea infuser, do consider the size of the mug because every model and variety holds a different amount of water; larger infuser mug means more tea with each use to make the perfect brew.

Thanks to travel tea infusers, you can explore these countries with a hot cuppa on the go.

5 thoughts on “Top 5 countries every tea lover should visit”