Thailand, like much of South East Asia, is blessed with a plethora of temples and wats to explore. There are thousands of wats (or temples) disseminated all around Thailand and there is no way to see them all in one lifetime. So, I’ve tapped my fellow travel bloggers to plug their favorite temples to guide you in your temple run around Thailand.

1. Shayan Naveed from Dose of Life recommends TEMPLE OF THE GOLDEN MOUNT (WAT SAKET) in Bangkok 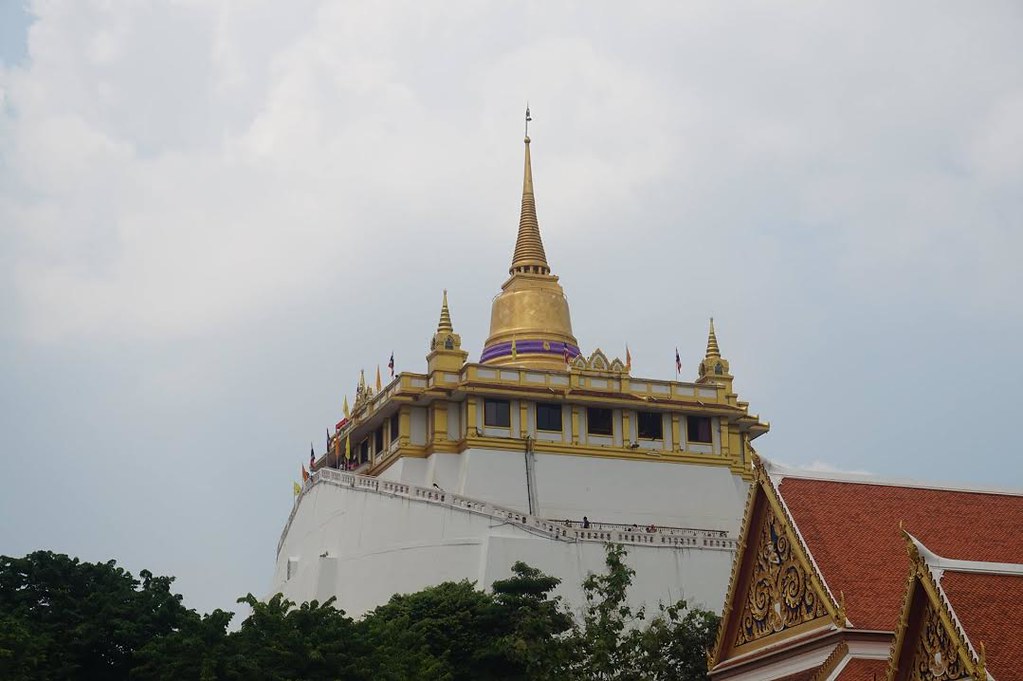 Perched on man-made hill is Wat Saket or popularly known as the Golden Mount. It was built back in the Ayutthaya dynasty around 1500s and was renovated in the late 1700s. The most prominent feature of this temple is the 58 meter chedi at the top, reachable by over 300 steps, This is one of few temples in Bangkok, which is often overlooked by tourists in favor of The Grand Palace, Wat Pho and Wat Arun. Locals go here to worship with a very foreigners being seen around. The temple also hosts an annual temple fair in November, which lasts a week during Loy Krathong festival. 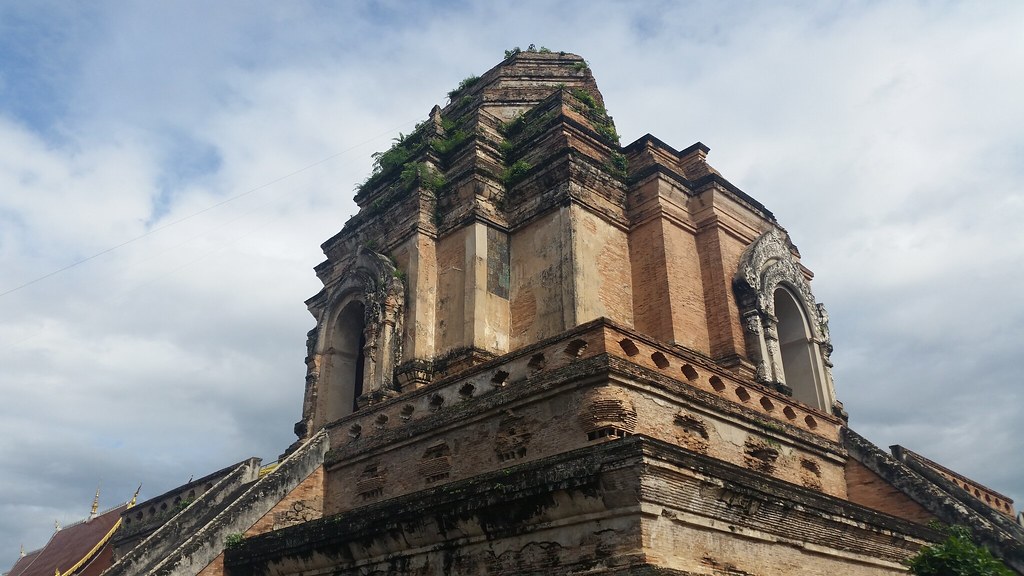 A stunning ancient structure located in the heart of the old city, Wat Chedi Luang sits at a height where it can overlook much of Chiang Mai.

In fact it was the tallest structure in Chiang Mai for over 500 years, but is now characterised mainly by its massive crumbling dome. Its other claim to fame is that the greatly revered Jade Buddha – now located in Wat Phra Kaew in Bangkok – was actually kept in this temple until the late 1400’s. There is also pillar on the grounds of Wat Chedi Luang – Lak Mueang or the City Pillar – that is believed to protect the city of Chiang Mai.

The appeal of this temple is its unembellished grandeur and the richness of its history, coupled with the still very strong religious beliefs surrounding the grounds connection to the protection of the city where it is located. 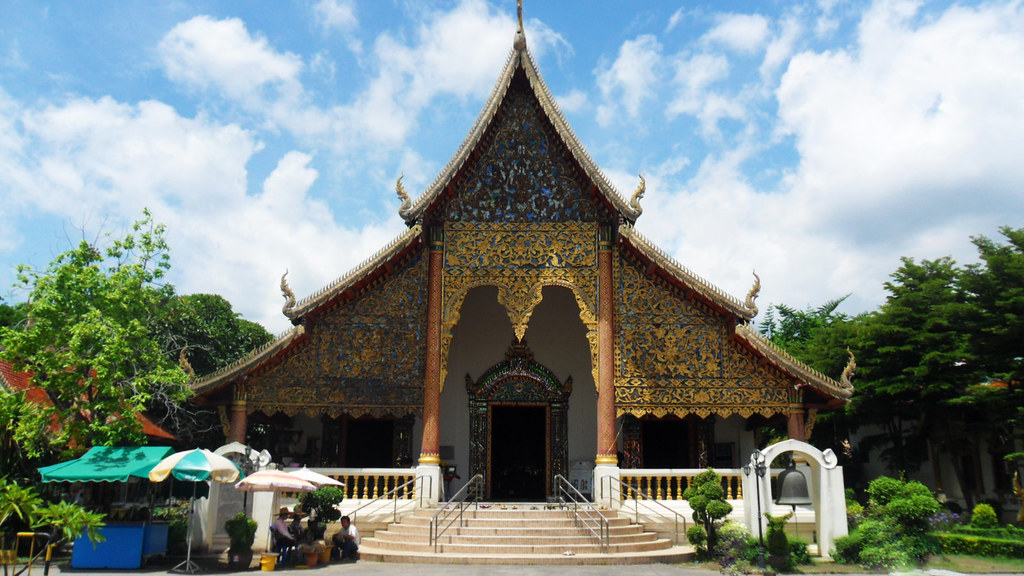 Situated in the north-east corner of Chiang Mai’s walled Old City, sits the Wat Chiang Man temple. Built in 1296, this glorious complex holds Chiang Mai’s first ever temple, laced in gold and glittering detail. Inside sits two rare Buddha statues, the Crystal Buddha and the Marble Buddha. Whilst out in the gardens stands an ancient Chedi, the complex’s oldest construction, studded with life-sized elephants. Apart from the dazzling architecture, the peaceful gardens are a place of serenity.

The White Temple (Wat Rong Khun) is by far the quirkiest, most unique temple we’ve seen in Thailand. Built in 1997 and designed in the style of a Buddhist temple, it is actually a privately owned work of art, with contemporary and religious symbolism at every turn. From eerie demons reaching out of the pits of hell as you cross a stark white bridge to the main building, to the unbelievably intricate mural inside, mingling depictions of movie characters, devilish depictions of world leaders, and Buddhist representations of the spiritual world. The White Temple is a far cry from your typical Thai temple, and well worth a visit. 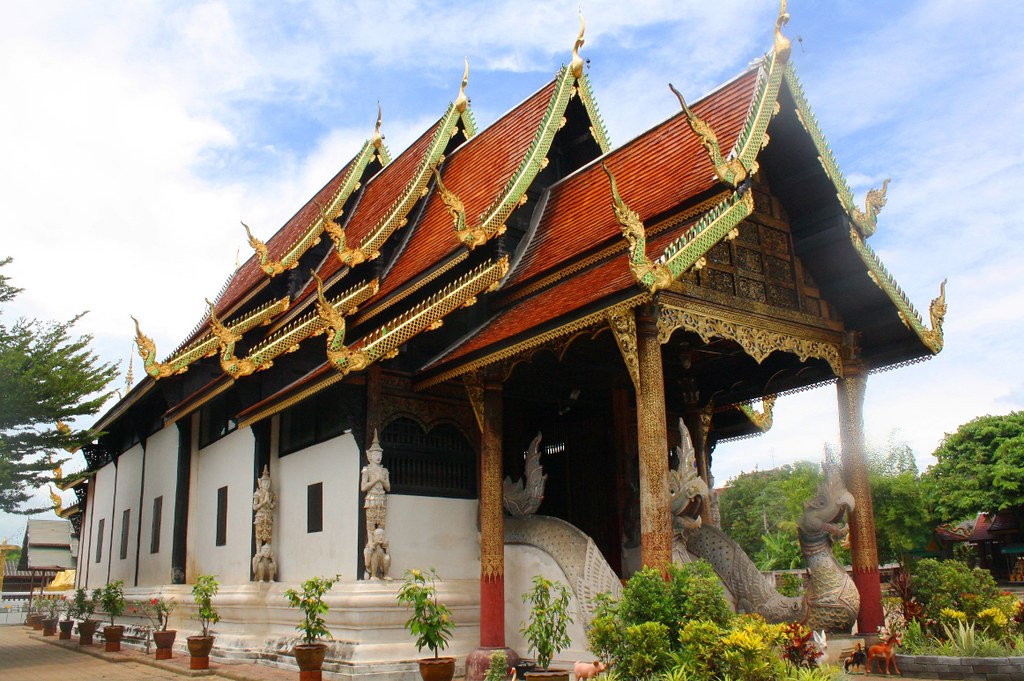 Apart from being a religious landmark, Wat Buak Krok Luang is also regarded as a historical gem in the northern part of Thailand. It has been around since the early 19th century and its design is reminiscent of the Lanna culture. But what makes this temple even more interesting are the murals found inside its walls, depicting the life of Buddha and other historical scenarios of Buddhism and Thailand’s Lanna traditions. 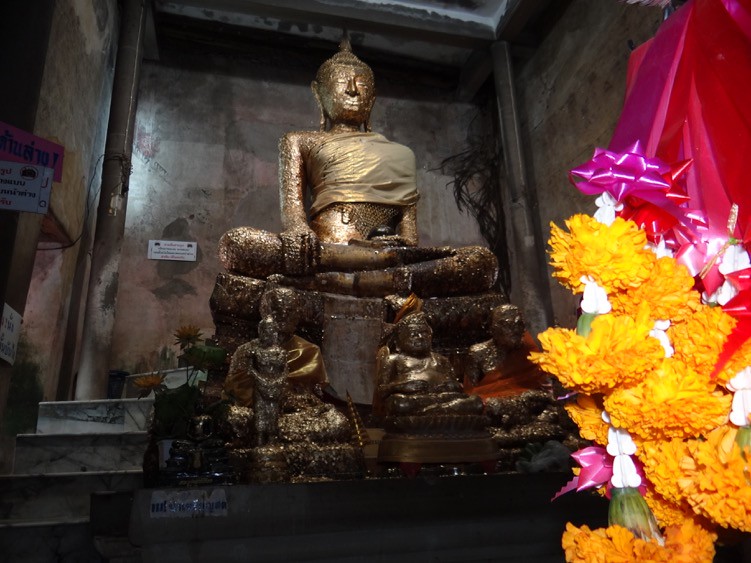 Take a drive out of Bangkok about 100 km, and keep your eyes open amongst the trees. Because hidden inside a tree is a tiny Buddhist temple – Wat Bang Kung is found. The tree roots have grown over the temple, but because buddhists are one with nature, they have left it as is and it is quite hard to find. Once inside you will find gold leaf paper being placed along with prayers and wishes for those loved – both dead and alive. 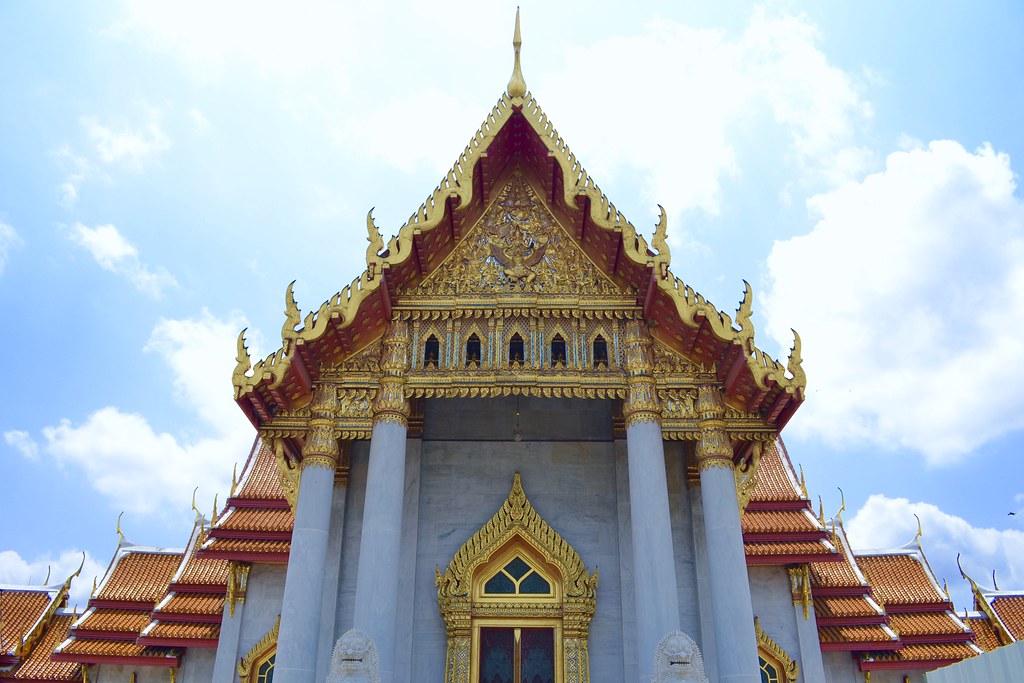 From marble pillars, to marble walls to marble almost everything – the temple has been built with Italian white marble, so it is not wonder why the temple is called ‘The Marble Temple.’ This sight also rose to fame after being featured as a pit stop on the Amazing Race Season 9. You’ll also see an image of the temple displayed on the 5 Thai Baht coin.

8. Aleah Taboclaon from Solitary Wanderer recommends WAT PHO (THE TEMPLE OF THE RECLINING BUDDHA) in Bangkok 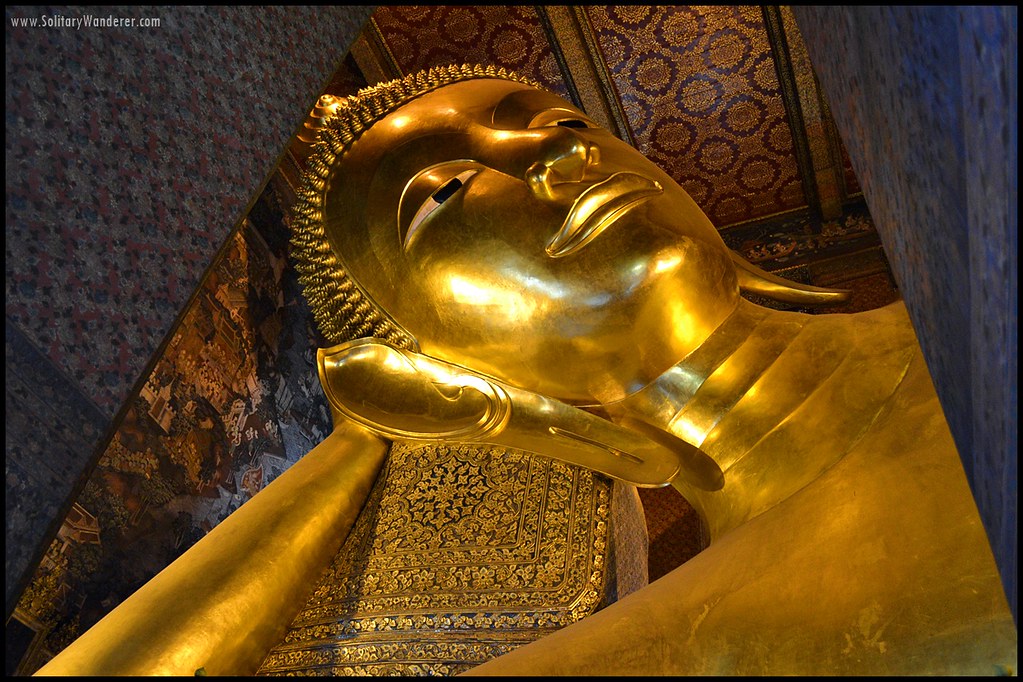 Wat Pho, or the Temple of the Reclining Buddha, in Bangkok, should be one of the top priorities of Thailand visitors. Covered in gold leaf and dominating the temple at 46 meters long, being in the same room as the giant reclining Buddha is humbling. Definitely a must-see. 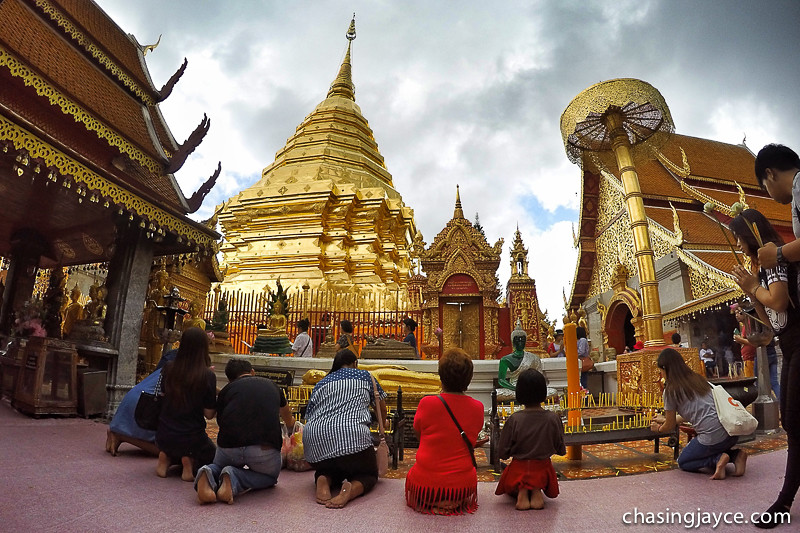 The sacred site that enshrines a holy relic of Buddhism, the Wat Doi Suthep was built on a special location chosen by a legendary white elephant. Set on its namesake mountain, it is the one temple that must not be missed when in Chiang Mai. 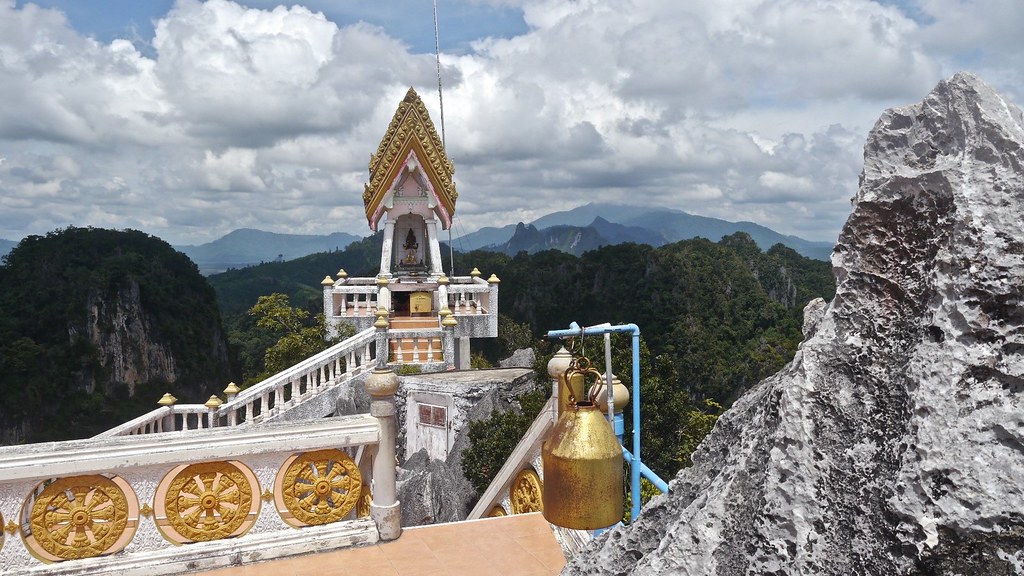 The Tiger Cave Temple outside of Krabi, Thailand, might not be as opulent as some of those around Bangkok or Chiang Mai, but it is certainly one of southern Thailand’s premier attractions. Reaching the temple is no joke. The arduous climb to the top of the mountain takes visitors up 1237 steps–many of which are at least a meter high–that run vertically up the side of the mountain. Once at the top, views of the emerald-colored, karst monoliths are nothing short of breathtaking.

11. Bianca Caruana from The Altruistic Traveller recommends WAT MAHATHAT (TEMPLE OF THE GREAT RELICS) in Ayutthaya 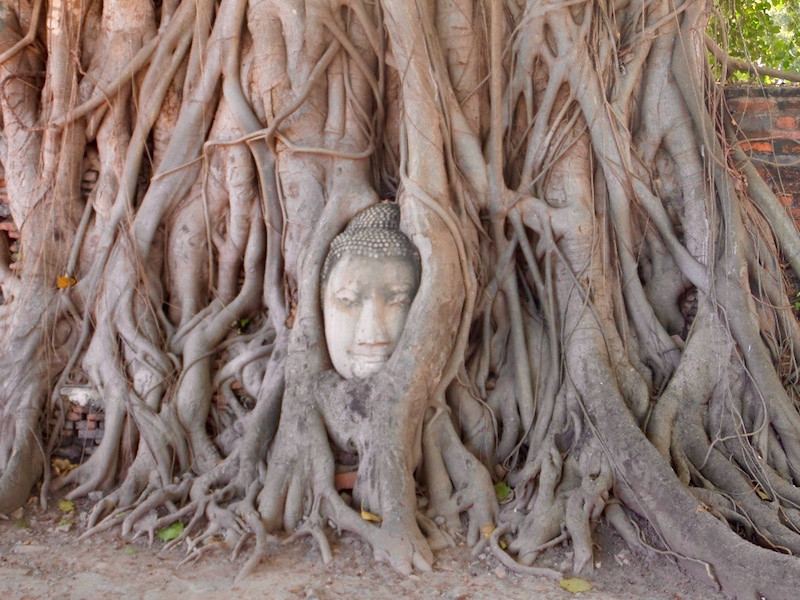 Wat Mahathat (Temple of the Great Relics) is one of the most famous temples in the ancient 14th century city of Ayutthaya. The ancient city is located about 80km north of Bangkok and is most famous for the well-known image of the Head of Buddha that is wrapped in tree trunks and roots after years of preservation. Wat Mahathat is said to have contained the relics of Buddha and holds significant religious and historical value to Buddhist people.

12. Yours truly recommends WAT PHRA KAEW (TEMPLE OF THE EMERALD BUDDHA) in Bangkok 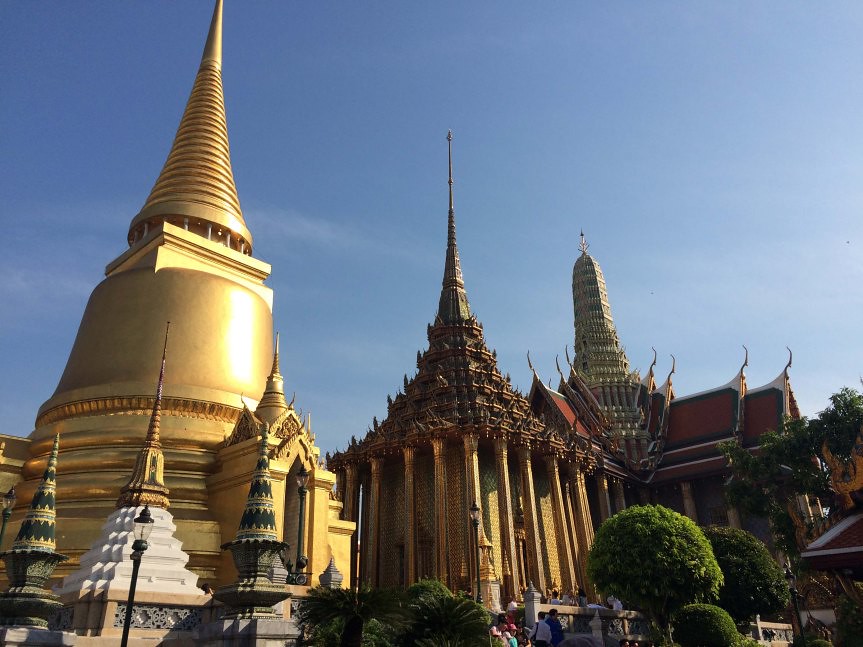 This temple is different from common temple because there is only ceremonial area in the temple, while normal temple has both ceremonial area and monk’s living area. In short, the Emerald Buddha temple does not have monks because it is just a royal chapel of the palace. According to previous main palaces in Thailand, they are always a temple only for performing royal ceremony, but not for monk living.

Have you been to any of these temples? Which one sparks your interest? Let me know in the comments below.