I can honestly say that one of the main reasons why I visited Singapore is because of the Universal Studios. I love Theme Parks, sue me. I am in my mid-20’s but I am still a kid at heart. I spent one full day in Universal Studios, yes a whole day! But, trust me, it is not enough to ride all the attractions, that’s why I am definitely getting an express pass on my next visit.

For visitors to Singapore I would definitely have Universal Studios high on my list of things to do whilst in town and would strongly recommend purchasing an express pass when you arrive to the park as it will allow you to whiz through the park in a couple of hours, rather than to spend the entire day in the humid heat. 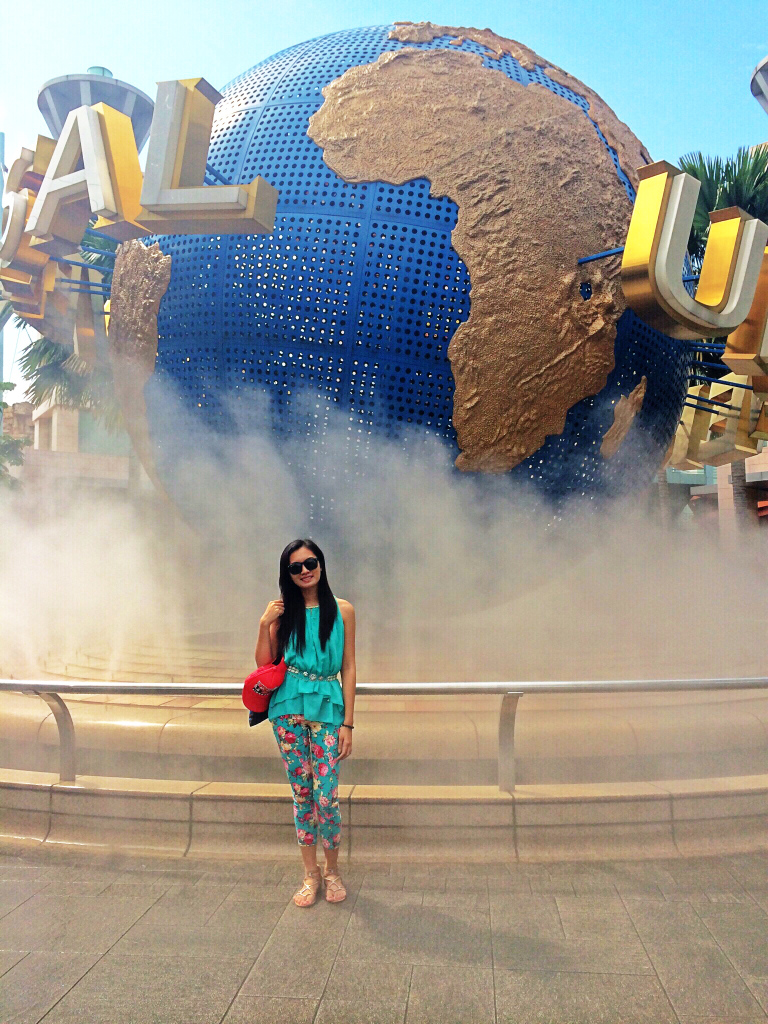 Universal Studios Singapore opened in 2010.  It is part of the Resorts World Sentosa complex on Sentosa Island. The park consists of 7 themed zones – Madagascar, Far Far Away (Shrek theme), The Lost World (including Waterworld and Jurassic Park), Ancient Egypt (including The Mummy), Sci-Fi City (including Transformers), New York (including Sesame Street) and Hollywood.

Here’s the theme park’s map so that you can imagine it clearly. 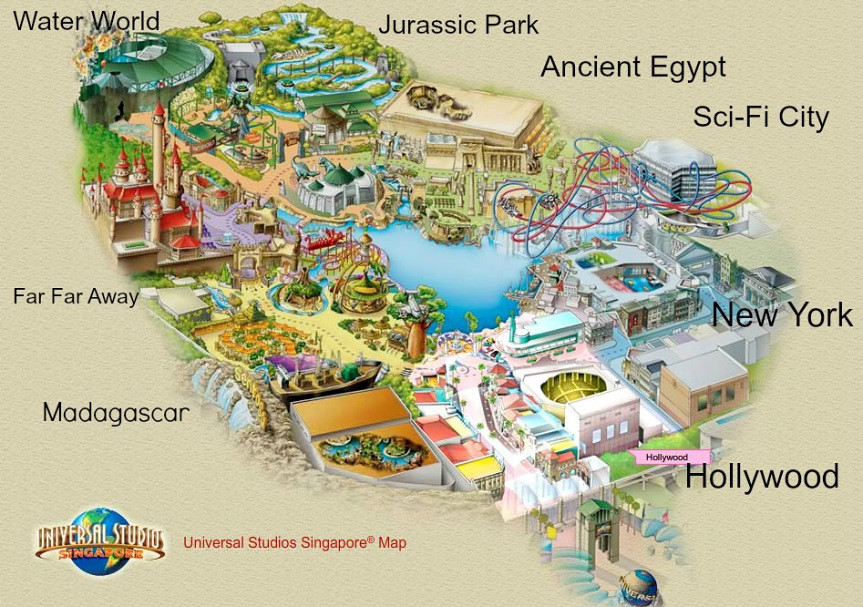 Each themed zone has its own attractions, shopping, eating establishments and street entertainment around the theme. There were rides, street performances, live shows and movie characters. 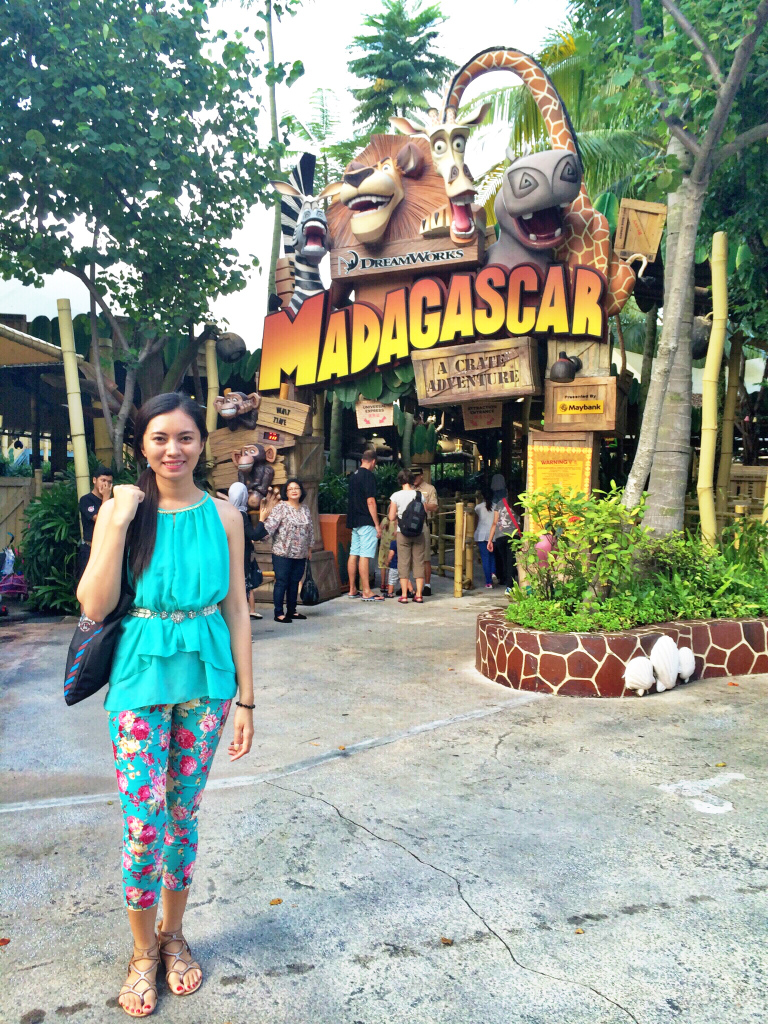 Madagascar happened to be my first stop. It has 2 main attractions here : A Crate Adventure, which is a boat ride to the Madagascar world, and Julien’s Beach Party-Go-Round. There aren’t any special ride here for me. But, I tried one though. 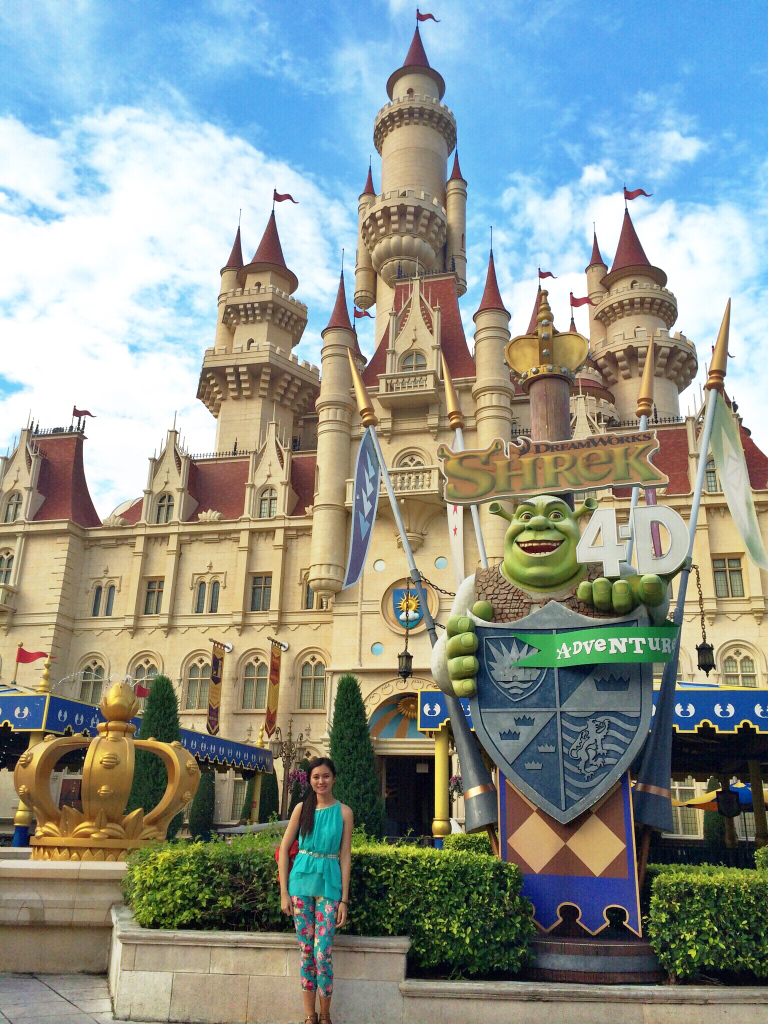 The attractions they got here are Shrek 4D Adventure, Enchanted Airways which is a junior coaster, and Donkey Live Show where you’ll be literally talking to a donkey. My favorite one is Shrek 4D Adventure. Here, you’ll be sitting on a moving chair in a theater watching an exciting Shrek tale. And you’ll be sprayed with water and even experience a spider tickling.

And if you’re lucky, you can get a photo with Shrek and Fiona! 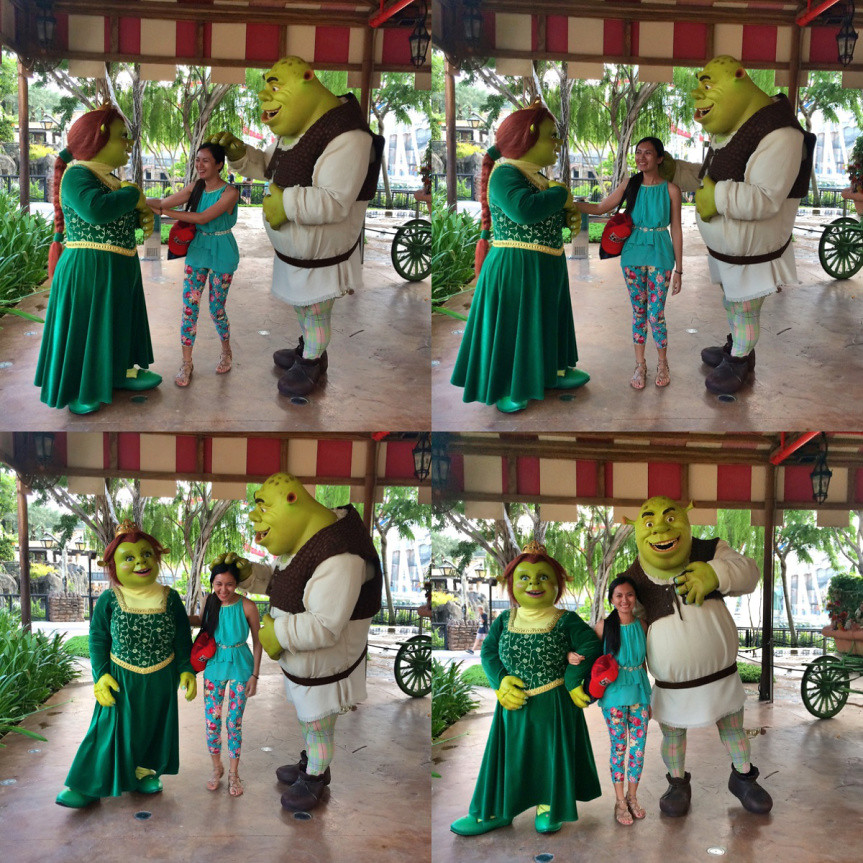 This zone have Waterworld, Canopy Flyer and Jurassic Park Rapids Adventure. The Canopy Flyer is a flying swing ride where you’ll be sitting with your legs dangling and then you’ll fly just like a bird.  It looks fun when it’s not yet your turn. But, it will twist you like crazy. 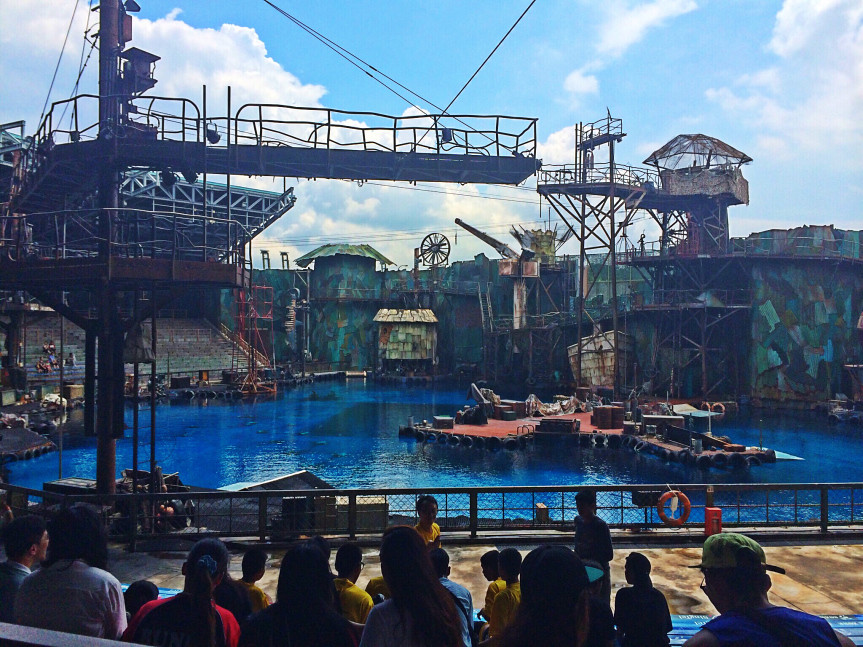 Jurassic Park Rapids Adventure is also great. You’ll be sitting (with belt) in a tube ride and then begin your journey through the Jurassic jungle slowly. But then at the end of the ride, you’ll meet T-Rex and experience a quick drop and you might get soaked at the end.

I love the Waterworld. Based on the blockbuster film, “Waterworld”, I witnessed a tidal wave of death-defying stunts, along with thrills and spills from real explosions of fire and water at this sensational live water show.

The Revenge of the Mummy ride is here. I waited for more than an hour for a 10-minute ride but it was totally worth it! 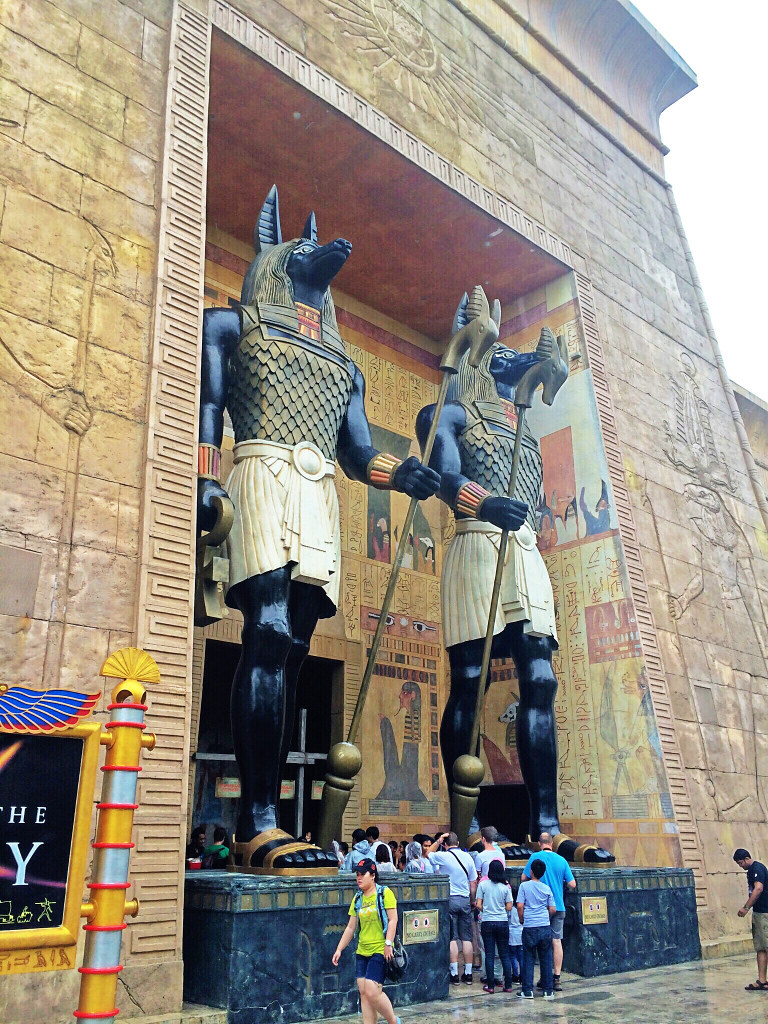 As you enter the building, you will walk through a narrow maze decorated with Egyptian artifacts. It was quite dark in there but once you are seated, you’ll begin having a surprising journey with a great story telling. The ride involves a backward motion, twisting and spinning and actually I don’t know what exactly they do to us, but really, this is a must ride if you happen to visit USS. If I had more time, I would definitely be back on board again and again! There were some interesting Egyptian themed characters around this zone too.

This zone has one of the best attractions at Universal Studios Singapore – TRANSFORMERS The Ride: The Ultimate 3D Battle. This ride is beyond fantastic, I swear! It takes the 3D ride into the next level. It’s not just as simple as having a stuff popping out the screen in front of you. It’s much more than that. 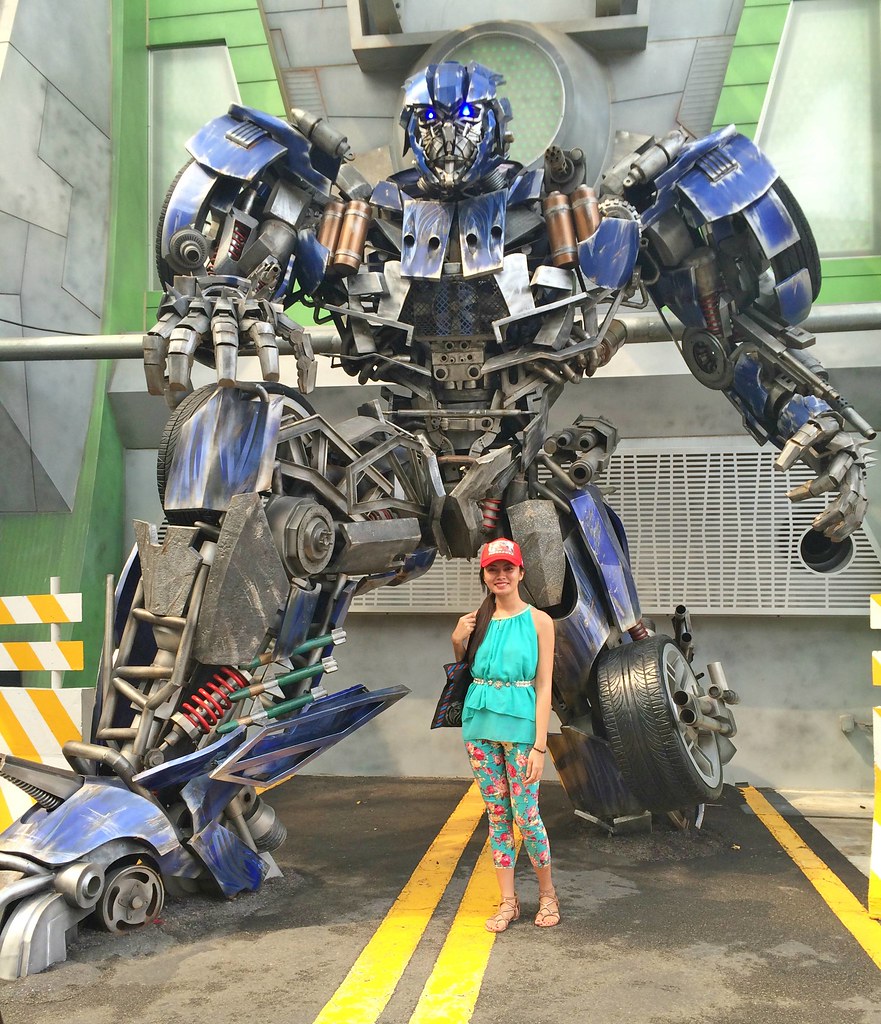 Here, you’ll ride a futuristic vehicle through an amazing transformer world and then you’ll be moving from one 3D scene to another. This ride has so many bumps, backward motion, fog, sound effect, and even a ‘falling’ effect. It was fantastic and so real that I felt I was really involved in the transformer battle. There was one moment when you are suddenly whipped into an office building and you crash the tables and then you crashed into the window and fall to the street and the transformer saved you. It has a great senses of speed, direction and turn and everything happens so fast! 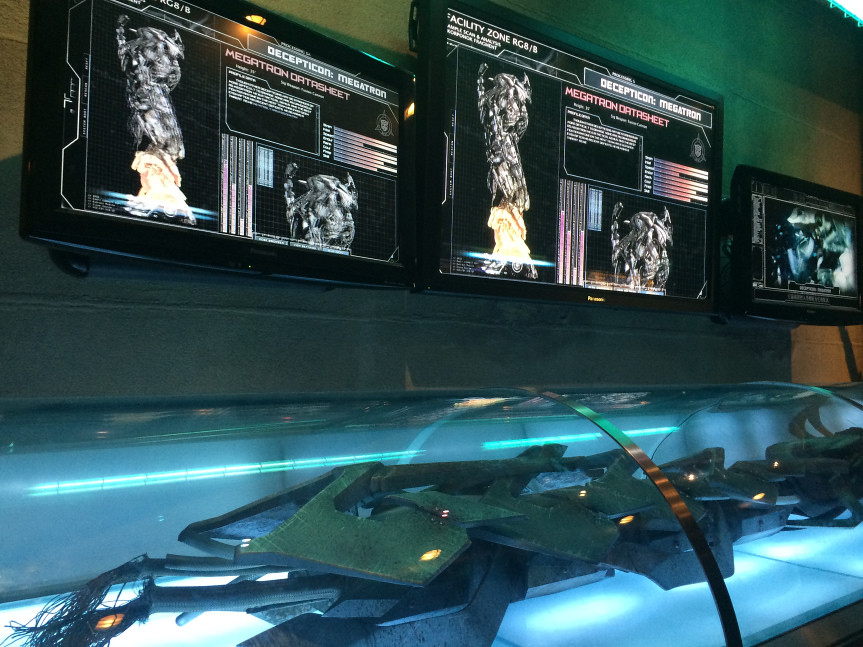 I loved how the theme continued when the ride finished too – the ride attendant cheered and thanked us for saving the world. Yes, ok! 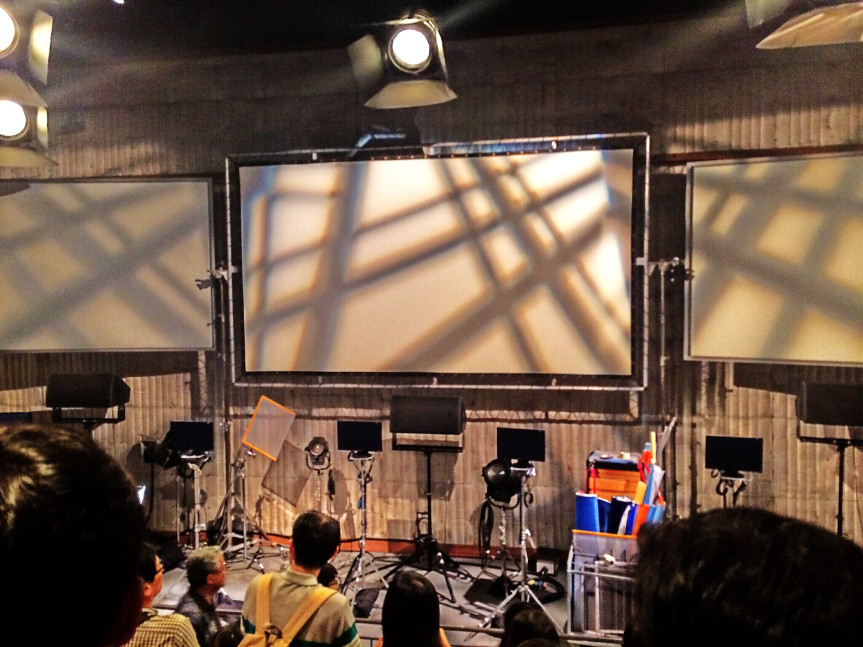 After the extreme rides, going to New York is a good way to mellow down. I was amazed by Lights, Camera, Action by Steven Spielberg. It was a show actually, demonstrating a hurricane about to hit New York City and it was as real as those in the movies. You’ll be able to see the storm, the fire, and other unexpected scene. That was quite a show.

I also tried the Sesame Street: Spaghetti Chase. Just like the Madagascar’s A Crate Adventure, this was nothing special for me. I didn’t grow up watching the show so I barely relate. But, for those who loves the Sesame Street, I’m pretty sure this is a hit. 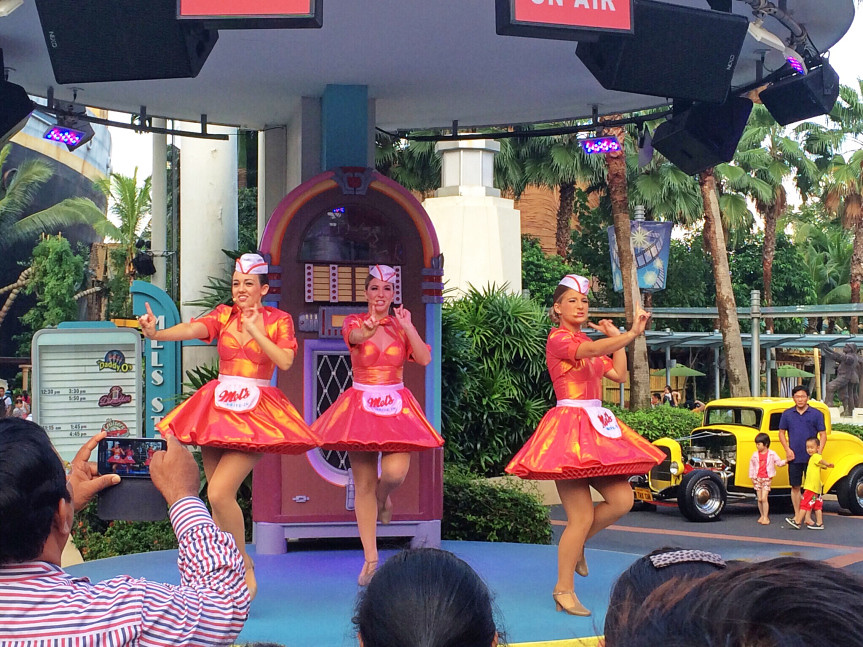 The park starts and finishes in Hollywood which seems fitting.  This area is mostly about shopping but there is also a live rock show full of monsters such as Dracula and Frankenstein.

1. Take North-East line or Circle line to HarbourFront station.
2. Take Exit E to VivoCity and proceed to level 3 to board the Sentosa Express. Alight 1 stop later at Waterfront station.
3. Walk straight till you see Chili’s Restaurant on your right. Turn right and head towards the Universal Studios Globe.

Have you been to Universal Studios Singapore? Which was your favorite world?